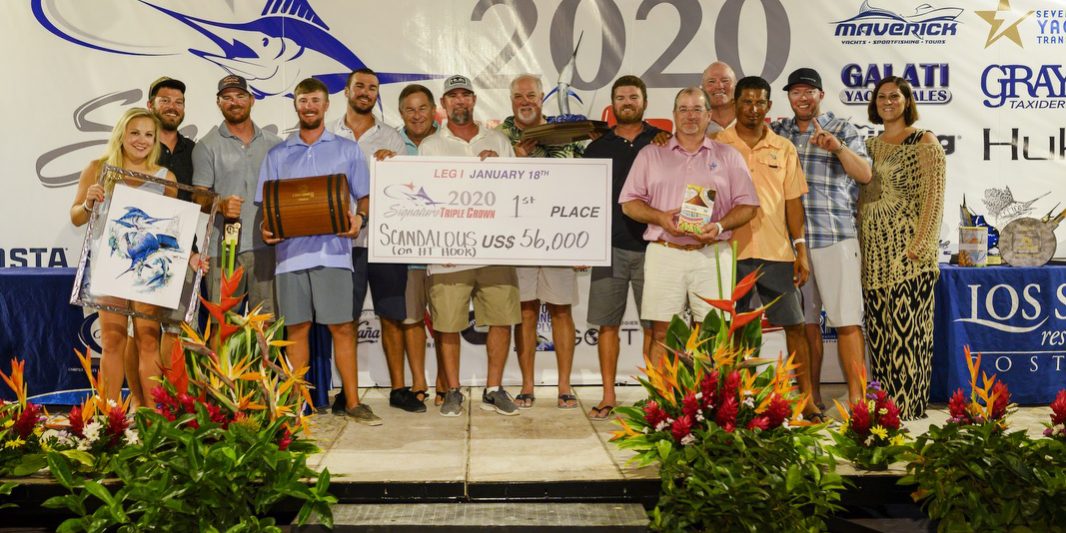 The seventh annual Signature Triple Crown billfish series, presented by Los Sueños Resort and Marina and Chantilly Air, was held at Los Sueños January 15-18, 2020. One hundred and eighty highly competitive anglers jumped aboard 38 boats to release 523 sailfish and 70 marlin in just three days, for a combined total of 593 billfish, translating to a per boat average of 16 billfish.

Held on Tuesday, January 14th the second annual Ladies Only Tournament, also presented by Los Sueños Resort and Marina and Chantilly Air, and sponsored by Maverick Costa Rica, Galati International Yacht Sales, and Viking Yachts brought together 17 teams comprised of 52 individual anglers. The Ladies Only Tournament does not allow professional anglers, so these able women were able to showcase their skills on the water, releasing 59 sailfish and 18 marlin for a combined one-day total of 77 billfish. Sea Angel, a 72’ Merritt captained this time around by Johan van Coller, is the name to remember this time around, as they – anglers Luanne Angel, Shelby Stribling, Missy Baum, and Brenda Zamora – released 4 sails and 4 marlin for a total of 2400 points, 700 points ahead of the runner up, Fish Tank, a 63’ Hatteras captained by Ben Horning with anglers Laura Jessen and Michelle Keeney, finished second with 1700 points after releasing 7 sails and 2 marlin. Max Bet, captained by Austin Shane Robins, with anglers Kelly Weber and Nicole Scotti, rounded out the top teams with 1100 points for their release of 6 sailfish and 1 marlin.

Awards were presented the following day and the ladies took to the stage to receive their checks and other prizes and trophies, sponsored by Driftless Glen Distillery, Cabo Unico, Steve Goione, and Gray Taxidermy. A total of $32,500 was handed out, 50% going to first, 30% to second, and 20% to third. Individual angler points follow the ladies through all three legs of the 2020 Signature Triple Crown and will be tallied to their total individual scores from that event to determine the Top Female Angler Overall in March. It is Laura Jessen of Fish Tank leading the pack with 1400 points after releasing 4 sails and 2 marlin.

Smooth Move started the tournament off right with a marlin release at 8:11 am. By 10:34 am, six more marlin had been released, including Numero Uno with two marlin in fourteen minutes for an early lead with a 1000 points that they maintained through the 12 o’clock update. Smooth Move was in second on time, also with 1000 points, followed by First Light with 800 points. However, as it goes with fishing, at 12:19 pm Dealer’s Choice released a marlin bumping them to a short-lived first placed and by 2 pm the leaderboard showed three entirely different names: Scandalous in first with 1500 points, Tarheel in second with 1300 points, and War Party in third with 1200 points. At 3:23 pm Reel Joy released the first and only quintuple sailfish hook up of the tournament, earning them a second place finish (on time) at the end of the Day with 1800 points after releasing 13 sails and 1 marlin, behind Scandalous. Scandalous had an incredible day with 4 marlin and 3 sailfish releases for 2300 points for the day and a commanding lead. War Party rounded out the top three, with 1800 points after releasing 3 sails and 3 marlin. Incredibly, Reel Joy and War Party were not only tied for points, but on time as well, forcing the tournament to break the tie by going back to their second last release time!

Smooth Move once again got the day started with an impressive triple sailfish release just three minutes past lines in! By 10 am, 9 marlin had been released shuffling the leaderboard just a little and moving Smooth Move in to second place with 2600 points, behind Scandalous with 2800 points and ahead of Reel Joy with 2300 points. Five more marlin and nearly 30 sails were released by the fleet between 10:02 am and 11:49, with Family and Friends reporting a rare spearfish, released at 11:54 am. Despite many teams giving a valiant show, the leaderboard did not change over the course of Day 2, leaving Scandalous in first at the end of the day with a two-day total of 4 sailfish and 6 marlin releases for 3400 points, followed by Smooth Move in second with 2800 points after releasing 18 sails and 2 marlin, and Reel Joy in third with 2700 points with their 17 sailfish and 2 marlin releases.

There was yet another exciting start to Day 3, with Reel Development reporting a sailfish release at 8:05 am, at the same time that Scandalous reported a marlin hook up, which they released by 8:08 am, propelling them 1100 points ahead of the runner up, Smooth Move. Game Changer started the day in fifth place, but went on to release 5 sails, including two doubles, and a marlin by 10:00 am to move in to second with 3300 points, behind Scandalous with 3900 points and bumping Smooth Move to third with 3000 points. Outage was the silent contender this time around, creeping up from a seventh day finish on Day 2 to third with 8 sailfish and 1 marlin releases by 12:56 pm, moving Smooth Move from the leaderboard. They went on to release another 2 sails and finished the day in third with 3600 points with a three-day total of 21 sailfish and 3 marlin releases, behind Game Changer who released 30 sailfish and 2 marlin for 4000 points, and Scandalous with an impressive total of 5200 points for their 7 sailfish and 9 marlin releases.

Tournament participants, observers, sponsors, and guests arrived at the Los Sueños oceanfront Beach Club Saturday evening to enjoy Acustica Lounge’s Back to the 80’s Trio under twinkling lights and a starlit sky. The audience was treated to this leg’s Dock Show filmed by Rich Christensen and edited by Michael Butler. With a more romantic flair, the show reminisced about Los Sueños’ celebration of 20 years in 2020. Tournament winners took to the stage to receive a total of $112,000 in cash, as well as other prizes provided by tournament sponsors, including trophies by Gray Taxidermy, framed prints of this year’s tournament art by Steve Goione, Flor de Caña aged rum, Vodka by Driftless Glenn Distillery, and hand painted custom tequila bottles by Mexico’s Cabo Unico.

The top team from each leg of the Los Sueños Signature Triple Crown will be eligible to compete in the 2020 Offshore World Championship. For further information, please visit www.offshorechampionship.com.

ABOUT THE LADIES ONLY TOURNAMENT

2020 marks the 2nd Annual Ladies Only Tournament, a one-day only team event, designed to showcase truly competitive non-professional female anglers. Entry is free for boats participating in all three legs of the Signature Triple Crown. Individual angler points are tallied with those earned during the Triple Crown to determine the Top Female Angler Overall in March. Get ready for 2021 when the ladies will be competing on Tuesday, January 19.

ABOUT THE SIGNATURE TRIPLE CROWN

Sea Angel, a 72’ Merritt captained this time by Johan van Coller, since Captain BC Angel is home with his wife Andrea and their new baby. Congratulations! Anglers Luanne Angel, Shelby Stribling, Missy Baum, and Brenda Zamora released 4 sails and 4 marlin for 2400 total points and the win.

Team Scandalous fished aboard HT Hook, a 62’ Viking captained by Ronnie Riebe, this tournament. While Ronnie is no stranger to the tournament stage, this was Scandalous’ first podium finish. Anglers Rusty Little, Alan Latham, Keith Henry, Randy Gregory, and Corbin Plumlee outshone all the other teams as far as marlin releases, and with every marlin counting for 500 points versus 100 for each sail, they made them count!

Congratulations to angler Alan Latham of Scandalous, who released 2 sails and 3 marlin over the three days of competition for a total of 1700 individual points and top honors this leg. We owe you your moment in the spotlight in February, Alan! Enjoy the Flor de Caña.

Game Changer, a 62’ Bayliss captained by Ben Polk, enjoyed their first podium finish with owner/angler Bob Faith and fellow anglers Dale Lackey, Stevie Leasure, Lewis Stoneburner, and Chip Campsen. The team finished 12th on Day 1, 5th on Day 2 and had a nice run in the first two hours of Day 3 to take their second place finish.

Outage, a 61’ Jim Smith captained by Ian Wichers, stood on the podium for the first time with owner/angler Neil Subin and fellow anglers Tom Wichers, Skyler Wichers, Alan Sadler, and Thomas “Smalls” Garmany. Outage finished 15th on Day 1 and 7th on Day 2, making up a lot of ground on Day 3 for their third place finish.