LEG 2 WAS A FIGHT TO THE FINISH 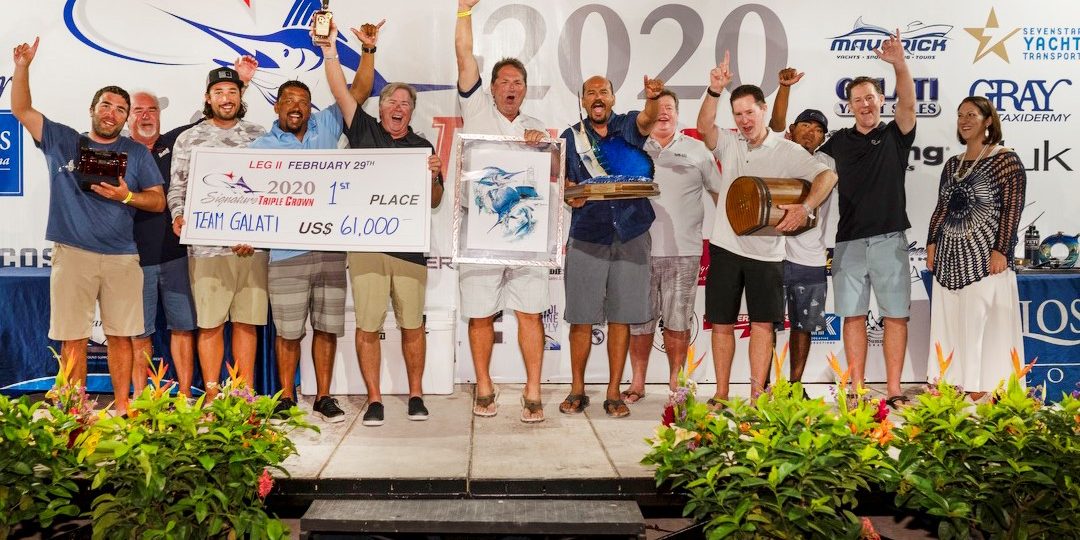 No clear winners until the bitter end

The second leg of the seventh annual Signature Triple Crown billfish series, presented jointly by Los Sueños Resort and Marina and Chantilly Air, was held at Los Sueños February 26-29, 2020. Forty one team comprised of two hundred two individual anglers worked through the heat and the adrenaline of competition to release a three-day combined total of 870 billfish, including 703 sails and 67 marlin.

The tournament kicked off with a sailfish release by Shoe eight minutes after lines in was called at 8:00 am. Gallo Pinto took an early lead with a marlin release at 8:24 am, but HT Hook moved into first at 9:05 am with a striped marlin and three sails and stayed there until after 11 am, ahead of Team Galati and Gallo Pinto. By noon the field had released 164 sails and 8 marlin, and it was HT Hook still in first, but on time only, with 1200 points, followed by Tarheel also with 1200 points, and Team Galati with 1100 points. Off Duty made their first appearance on the leaderboard, moving to first with a marlin release at 12:44 pm, but were bumped out by Team Galati with a double sailfish release at 1:28 pm, only to take the lead back at 1:44 pm with another marlin release. Game Changer entered the fray, moving to second with a marlin release at 3:06 pm. War Party plucked away at the sailfish all day long, finishing with 16 sails, the most releases of any boat on Day 1, but secured their second place finish for the day with a marlin release at 3:12 pm. As the sun set Thursday evening, the official scores showed Off Duty in first with 2200 points (12 sails, 2 marlin), followed by War Party in second with 2100 points (16 sails, 1 marlin), and Team Galati in third with 2000 points (15 sails, 1 marlin).

D.A. Sea started the day off with a sailfish release at 8:07 am and by 10 am the 41 participating teams had released a two-day combined total of 415 sails and 20 marlin with Off Duty in first with 2300 points, War Party in second with 2200 points and Game Changer in third with 2100 points. Between 10 am and noon, War Party went on to release three more sails, taking first with 2500 points as of the midday update. Reel Joy enjoyed the top spot with two marlin releases at 12:30 pm, which they kept until Team Galati released their second marlin at 1:17 pm, taking them to the front of the pack, where they remained for the rest of the day. At 4 pm, it was Team Galati in first with a two-day total of 3500 points (20 sails, 3 marlin), followed by Reel Joy in second on time with 3000 points (15 sails, 3 marlin), and Tarheel in third, also with 3000 points (20 sails, 2 marlin).

Outage started the day off with a marlin hook up at 8:04 am, which they released five minutes later. In under an hour, seven more marlin had been release by the fleet and by 10 am the leaderboard looked almost completely different, with Off Duty in first with 4100 points, Team Galati in second with 4000 points, and Outage in third with 3300 points. Team Galati was in first at noon, over Off Duty and Fish Tank. Outage went on to bump Fish Tank out of third just before 1 pm and then moved to first with a marlin just 20 minutes later. Team Galati took the top position back with a double sailfish release before 2 pm. At 2:21 pm Team Galati, Off Duty (who had just released a triple), and Outage were all tied on points. No sooner had this report been shared on the official tournament radio, Outage released a double and moved ahead of the pack. Team Galati then took first with a marlin just before 3 pm and stayed there until the end, where they finished with a three-day combined total of 5000 points after releasing 25 sails and 5 marlin. Team Galati was followed by Outage in second on time, with 4800 points after releasing 23 sails and 5 marlin, and Tarheel released 33 sails and 3 marlin, also for 4800 points and third place.

The top angler award is usually always a surprise and it was so much so this time around that the man of the hour, Mike Ivancevic of Fish Tank, wasn’t present to receive his award. Mike achieved the highest score out of all the non-professional anglers after releasing 8 sails and 2 marlin for 1800 individual points. Congratulations!

Tournament participants, observers, sponsors, and guests arrived at the Los Sueños oceanfront Beach Club Saturday evening to enjoy Acustica Lounge’s Coco Hits under twinkling lights and a starlit sky. The audience was treated to this leg’s Dock Show filmed by Rich Christensen and edited by Michael Butler. Tournament winners took to the stage to receive a total of $122,000 in cash, as well as other prizes provided by tournament sponsors, including trophies by Gray Taxidermy, framed prints of this year’s tournament art by Steve Goione, Flor de Caña aged rum, Vodka by Driftless Glenn Distillery, coolers by Yeti, and hand painted custom tequila bottles by Mexico’s Cabo Unico.

The top team from each leg of the Los Sueños Signature Triple Crown will be eligible to compete in the 2020 Offshore World Championship. For further information, please visit www.offshorechampionship.com.

ABOUT THE LADIES ONLY TOURNAMENT

2020 marks the 2nd Annual Ladies Only Tournament, a one-day only team event, designed to showcase truly competitive non-professional female anglers. Entry is free for boats participating in all three legs of the Signature Triple Crown. Individual angler points are tallied with those earned during the Triple Crown to determine the Top Female Angler Overall in March. Get ready for 2021 when the ladies will be competing on Tuesday, January 19.

ABOUT THE SIGNATURE TRIPLE CROWN

2020 marks the 7th Annual Signature Triple Crown billfish tournament series. The Triple Crown consists of three annual tournaments, in January, February and March each year, and is fished out of the world class Los Sueños Resort and Marina in Costa Rica. The dates for the third and final leg this season are March 25-28. Mark your calendars for 2021! Leg 1: January 20-23, Leg 2: February 24-27, and…NOTE: We have changed the dates for Leg 3 to March 17-20.

Chantilly Air is an Aviation Services Company providing Aircraft Maintenance, Charter, Management, Storage, Ground Support, and Aircraft Sales and Acquisitions. Chantilly Air holds the highest ratings available for their exemplary safety record, superior equipment and processes, and strict adherence to best industry practices. Chantilly Air has over 27 years of experience in corporate aviation. With our staff of highly experienced personnel, we are fully capable of supporting your company’s flight operations needs with our aircraft maintenance, fueling, charter and management services and have ample storage available within our approximately 70,000 square feet of hangar space. Information on Chantilly Air is available online at www.chantillyair.com.

Outage, a 61’ Jim Smith captained by Ian Wichers, with anglers Neil Subin, Tom Wichers, Skyler Wichers, Alan Sadler, Joey Trefelner, and Thomas “Smalls” Garmany* released 23 sails and 5 marlin for 4800 points. The team seems to be feeling comfortable on stage. This is their second win, after taking third in Leg 1. They had a slow start in Leg 2, finishing 35th on Day 1, but moved to fifth on Day 2 and finished second on the leaderboard for the tournament, on time.

Tarheel, a 62’ Bayliss captained by John Bayliss, with anglers Smyth McKissick, Bubba Brizendine, John Bayliss, Jr., Sean O’Donnell, and Jorge Carrillo Agüero* released 33 sails and 3 marlin for 4800 points. Tarheel is no stranger to the winner’s circle, having finished first in Legs 1 and 3, making them the Series Champion in 2015, then taking second in Leg 2 and becoming the Series Champion in 2018, and finally winning second in Leg 2 2019.