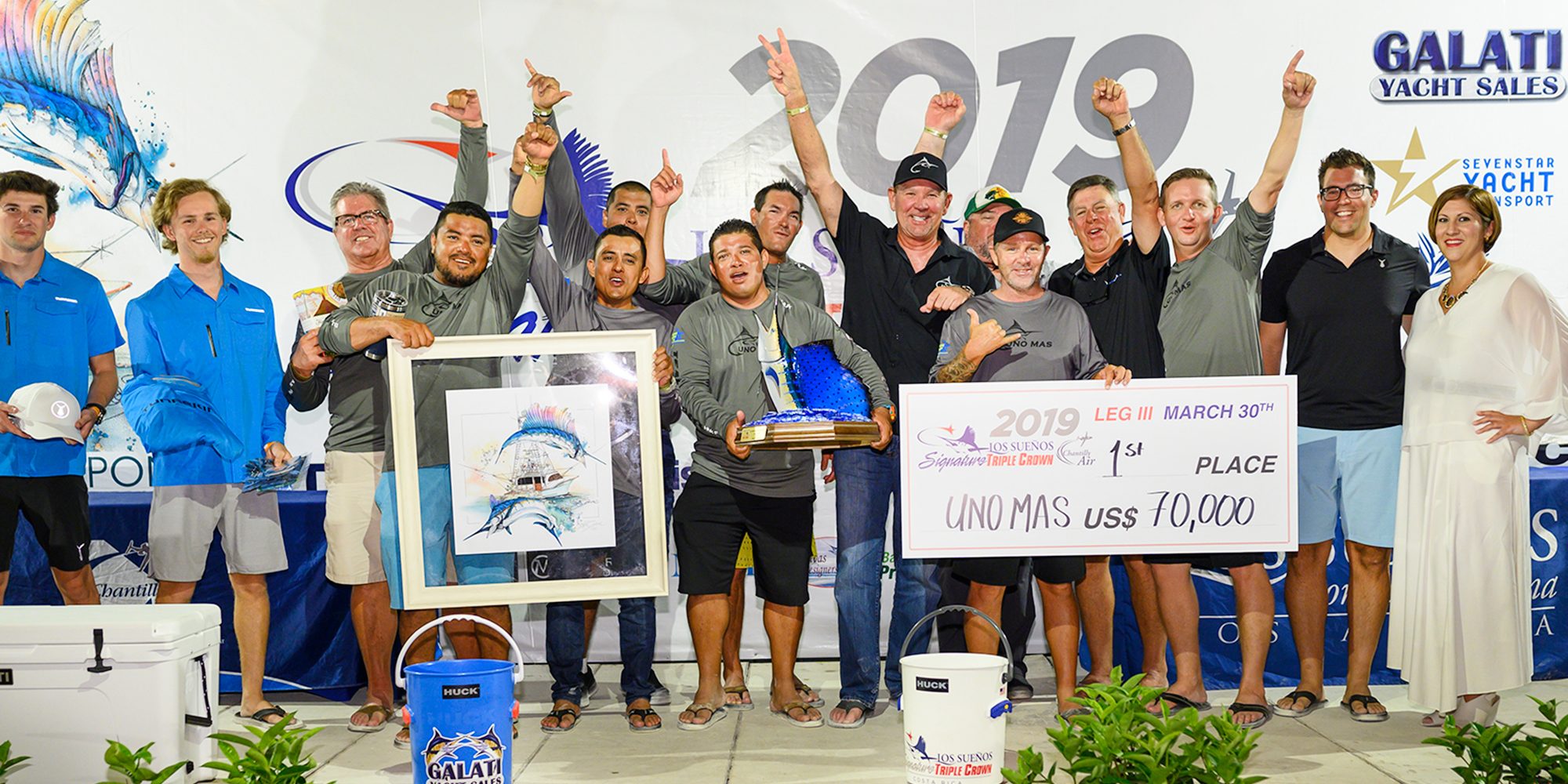 Going in to this event, the reports were that fishing was slow with 3-6 fish a day being average. We were pleased to see the teams find the fish when the radio went off with an early bite on Day 1 and ended with a nail-bite inducing finish on Day 3. With 100 points awarded for each sailfish release and 500 points for each marlin release, marlin always end up making a difference for the podium finishers. After all the scorecards were reviewed, a three-leg Triple Crown total of 3,945 billfish were released (3,820 sails and 125 marlin) – or 444,500 points achieved by the 51 teams that participated this year, 38 of which were registered in all three events.

It was Tarheel to call in the first fish of the tournament just eight minutes after lines in, followed in the same minute by a triple sailfish release by Shoe. By 8:37 am four marlin had been released, with another two released in the following hour. In the same amount of time nine doubles were called in a three triples. Needless to say, fishing started off promising. By 10 am a total of 117 billfish had been released (111 sails, 6 marlin) and Fish Tank was in top position, followed by Sea Angel in second, and Tarheel in third. At the end of the day though, Uno Mas had taken first with 2,100 points (16 sails, 1 marlin), Sea Angel remained in second with 1,900 points (9 sails, 2 marlin), and Blue Eagle finished third on time with 1,700 points (17 sails), over Scandalous and Dragin Fly. The fleet achieved 373 billfish releases on Day 1, including 361 sails and 12 marlin.

On behalf of the tournament committee and everyone at Los Sueños Resort and Marina, congratulations to all winners!

Nearly 700 guests came together under the stars at the Los Sueños Beach Club to enjoy a phenomenal buffet dinner and live music by Acustica Lounge’s Coco Hits. Immediately preceding the presentation of trophies, prizes and checks to the tournament winners, guests enjoyed the highly anticipated dock show filmed and produced by Rich Christensen and Michael Butler. The ceremony was closed out by a spectacular fireworks display by La Trinidad. Tournament winners took to the stage to receive a total of $240,000 in cash prizes, as well as other awards provided by tournament sponsors, including custom trophies by Gray Taxidermy, apparel by Tunaskin, framed prints of this year’s tournament art by Steve Goione, YETI coolers and tumblers, Huck buckets, Costa sunglasses, and Flor de Caña aged rum.

The top team from each leg of the Los Sueños Signature Triple Crown will be eligible to compete in the 2019 Offshore World Championship. For further information, please visit www.offshorechampionship.com.

2019 marks the 6th Annual Los Sueños Signature Triple Crown billfish tournament series. The Triple Crown consists of three annual tournaments, in January, February and March each year, and is fished out of the world class Los Sueños Resort and Marina in Costa Rica.

Calling all Lady Anglers!
21 August, 2018
Recent Articles
FROM OUR GALLERY