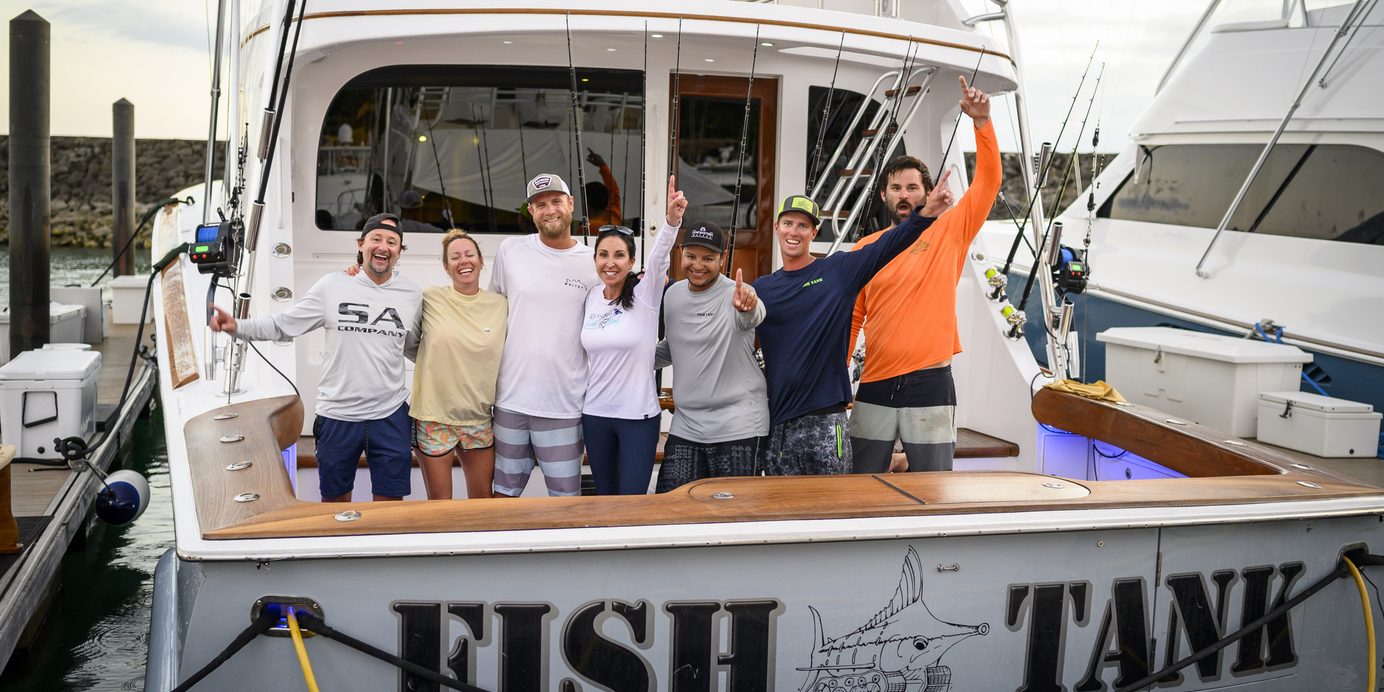 FOR THE PDF PRESS RELEASE WITH FINAL SCORES AND PHOTOS

Los Sueños Resort and Marina, located at Playa Herradura on Costa Rica’s Central Pacific Coast, held the first leg of its sixth annual Los Sueños Signature Triple Crown billfish series, presented by Chantilly Air, January 16-19, 2019. A total of 44 of the world’s most competitive billfishing teams comprised of 210 individual anglers challenged each other over three days of fishing, releasing a total of 648 billfish, including 582 sails and 66 marlin for a per boat average of 15 billfish releases.

Held on Tuesday, January 15th the first annual Los Sueños Ladies Only Tournament, presented by Chantilly Air and sponsored by Maverick and Galati Yacht Sales, brought together 49 individual anglers participating on 17 boats. It seemed like a clear battle between Family and Friends and D.A. Sea who were tied both for points and on time just half an hour before lines out. Fish Tank (anglers Laura Jessen and Michelle Keeney) surprised everyone though, calling in a marlin hook up which they went on to release at 4:04 pm for the win, having released 8 sails and 1 marlin for 1300 points. D.A. Sea (anglers Valerie Dunn, Susan McCart, and Judy Duffie) ended up second with 1100 points with 6 sailfish and 1 marlin release, and Family and Friends (anglers Jackie Kopp, Kristin Feller, and Andrea White) rounded out the leaderboard in third with 1000 points after releasing 10 sails.

Awards were presented the following day and the ladies took to the stage to receive their cash prizes and trophies, sponsored by Gray Taxidermy. A total of $27,500 was handed out, 50% going to first, 30% to second, and 20% to third. Individual angler points follow the ladies through the Triple Crown and will be tallied to their total scores from that event to determine the Top Female Angler Overall. So far, Jackie Kopp of Family and Friends is well in the lead with 700 points from the Ladies Only and 1500 points from the first leg of the Triple Crown.

It was Numero Uno who fittingly released fish “numero uno” of the tournament at 8:05 am on Day 1, January 17th. By 10:00 am the competitive fleet of 44 teams and 210 anglers had released 89 billfish, including 84 sails and 5 marlin. Tarheel took an early lead with 800 points, over The King and I and Blue Eagle, each with 700 points. The King and I showed their stripes early with 1800 points by noon, taking a 600 point lead over Tranquilo with 1200 points and Outlaw with 1100 points. Over 40 fish were released in the next two hours, but the leaderboard changed very little, with The King and I releasing one more sail for 1900 points, Tranquilo staying steady with 1200 points, and Outlaw rounding out the top three, also with 1 more sailfish release for 1200 points. Although The King and I ended the day in first with 2000 points, there was definitely some jockeying in the latter part of the afternoon; Wire We Here ended up releasing 6 sails and 2 marlin for 1600 points and second place, and Blue Eagle released the same fish for the same points, just 13 minutes later to take third for the day.

The King and I had a slow start to Day 2 with zero releases by 10 am, but managed to hold on to their first place spot. Wire We Here released four sails in the same period to tie The King and I with 2000 points, just 1 sailfish release and 100 points ahead of Reel Pushy. By noon the fleet had released a two-day total of 380 billfish and Fish Tank had pushed The King and I down to third on time after Wire We Here, both with 2100 points, and taking top spot with 2300 points. Family and Friends were keeping their name in front of spectators, taking top spot with 2600 points by 2 pm, followed by Fish Tank with 2400 points and Reel Pushy in third with 2300 points. By the end of the day Family and Friends had earned enough points after releasing 7 sails and 2 marlin for a two-day total of 2600 points, to keep their first place position. Reel Pushy released 7 sails and 2 marlin on Day 2 for a two-day total of 2500 points, and Fish Tank rounded out the top three with 2400 points after releasing 9 sails on Day 2. The top 9 teams were all within one marlin and one sail of the lead going in to Day 3.

Nearly 650 guests came together under the stars at the Los Sueños Beach Club to enjoy a phenomenal buffet dinner and live tropical calypso music by Acustica Lounge’s Pachanga Boys. Immediately preceding the presentation of trophies, prizes and checks to the tournament winners, guests enjoyed the highly anticipated dock show filmed and produced by Rich Christensen and Michael Butler. The ceremony was closed out by a spectacular fireworks display by Faisa and a jam-packed after party hosted at the Hook Up. Tournament winners took to the stage to receive a total of $130,000 in cash, as well as other prizes provided by tournament sponsors, including trophies by Gray Taxidermy, apparel by Tunaskin, framed prints of this year’s tournament art by Steve Goione, YETI coolers, and Flor de Caña aged rum, as well as a prize donated by CAT to the top CAT powered boat.

The top team from each leg of the Los Sueños Signature Triple Crown will be eligible to compete in the 2019 Offshore World Championship. For further information, please visit www.offshorechampionship.com.

ABOUT THE LOS SUENOS LADIES ONLY TOURNAMENT

2019 marks the 1st Annual Los Sueños Ladies Only Tournament, a one-day only team event, designed to showcase truly competitive non-professional female anglers. Entry is free for boats participating in all three legs of the 2019 Los Sueños Signature Triple Crown. Individual angler points are tallied with those earned during the Triple Crown to determine the Top Female Angler Overall in March.

Fish Tank, a 63’ Hatteras captained by Ben Horning, with anglers Laura Jessen and Michelle Keeney. Michelle was the top angler for this event, with 900 individual points after releasing 4 sails and 1 marlin.

Fish Tank, a 63’ Hatteras captained by Ben Horning, with owners/angler Chris and Laura Jessen, and their fellow anglers Kitt Toomey, Mike Ivancevic, and Darren Helwig, finished fifth on Day 1, third on Day 2 and released more sails than any boat in the competition, along with 2 marlin on Day 3 for the win. Fish Tank also took third place in Leg 1 of the 2016 Triple Crown and third place in Leg 3 2017. Laura Jessen is familiar with the stage, having also been the Top Female Angler in 2017. Fish Tank also placed first with anglers Laura Jessen and Michelle Keeney in the first annual Ladies Only Tournament on January 15, 2019.

Chris Jessen of Fish Tank achieved the highest points out of all participating non-professional anglers after releasing 6 sailfish and 2 marlin for 1600 individual points and took home the title of Top Angler for Leg 1.

The King and I, a 50’ Ocean Yacht, captained by Victor “Pia” Ceballos is from Guatemala and first started fishing the Triple Crown in 2018. Anglers Pablo Sechel, Sergio Alvarado, Juan Pablo Ramos, Juan Andres Morales and Charles Donato finished first on Day 1 and although Day 2 was a little slow, they finished in 7th place and made up the difference with two marlin releases on Day 3 for a second place finish in Leg 1.

Reel Pushy, a 58’ Monterey co-captained by Chris Workmon and Dave Dalfo also just started competing in the Triple Crown in 2018. This is their second year and angler/owner Robert Banker along with his fellow anglers Patrick Lanahan, Samantha Mumford, Tyler Wall, and Kevin O’Connor finished eighth on Day 1, moved up to finish second on Day 2 and ended the tournament in third place on time over Tranquilo, achieving their 3300 points four hours earlier.

Calling all Lady Anglers!
21 August, 2018
Recent Articles
FROM OUR GALLERY